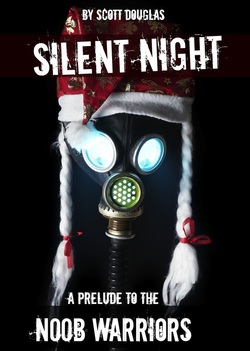 Before Dylan Hunter became a hero; before his best friend went missing; before his entire life changed because of a war he did not believe in...there was a Christmas that reminded him that nothing would be the same ever again.

This is both a short story and a prelude to "The N00b Warriors."

Also included in this collection is a interlude between the second and up-coming third book.

Dylan heard the car’s humming engine even though it was at least a mile away; he knew what they meant--someone was getting news. With gas being rationed only government cars still went on the street. When it slowed and finally parked in front of their home, his heart skipped a beat. It was for his sister or his dad. He looked at his younger brother, Jacob, who was sitting against the closet door holding onto his PSP tightly; he was too obsessed with his video game to even know what was going on.

Two figures got out of the car; one was Dylan's principal, a fat balding man in a Hawaiian shirt; the other was a man in his twenties wearing camouflage army fatigues--probably an army chaplain. He knew it was his sister. The principal wouldn't come to tell his mom about his father. He didn't want either to be dead, but if it had to be someone, he wanted it to be his father--he hardly knew him, but his sister had been close.

He went to the hall and waited for the doorbell to ring, then watched, hidden from his mom's view as she answered it. She didn't cry like he expected her to. She became quiet and her face red, but she didn't cry--she just held it in. She listened as the principal explained what a good student she had been, and the chaplain explained, giving no details, that she died bravely.

She only nodded. She didn't invite them in. She just wanted it over, and when it was she turned and saw Dylan for the first time.

"Honey, why don't you take your brother out for a bit, so I can be alone for a spell." Dylan was surprised by how calm her voice was. Not even the slightest hint of sadness.

"Just give me an hour to finish dinner and wrap presents--I don't want you to see me wrapping is all."

"Should I go get someone?" Dylan said, and added, "to be with you?"

She smiled, "I certainly know how to wrap presents--I think I can manage by myself." Her face got red and she turned quickly to hide it.

Dylan returned to his room where his brother was still playing his game; he had no idea that his sister was dead. He didn't know if he was supposed to tell him. "Come on."

He looked up and then his eyes went back to his game and he continued to play.

Dylan picked up dirty underwear from the floor and tossed it at his head.

"I said come on--mom wants us out of the house so she can wrap presents."

"I'm almost done with this level."

Dylan leaned down and grabbed the game and tossed it on his bed. "Let's go."

"Why are you such a jerk all the sudden?" Jacob whined, "It's Christmas--we're supposed to be happy."

Dylan pulled out his arm, "Just come on already."

"Where are we going?"

Dylan looked at a book on his bed, "The library." He grabbed it and began walking out of the room.

Dylan ignored him, and looked for his mom as he left. She was nowhere to be seen.

"Do you think they'll have any new guns at the library?"

"And what if they did?” Dylan said looking at his puny body. “You really think you'd get to try them out? You haven't even taken your exams."

He looked down. "I just want to look."

The Carlsbad Public Library was a 30-minute walk from Dylan's house; it was a large building that at one point held over 200,000 books. To get to it, they had to walk along the 5 freeway--a freeway that once had been one of the busiest freeways in the world, but was now used only for military travel.

The library had closed two years after the war had started, but reopened two years later as an Army surplus depot and shelter. Once every three months, Dylan went with his mom to pick used clothes with their government vouchers. The building had been gutted and all the books removed; all that remained of the original library was a small section in the back that was run by volunteers; they had salvaged a couple thousand books, and checked them out to anyone still interested in reading--Dylan was one of them.

The library was a ghost town on Christmas, but was still open for people who needed medical aide or other emergency supplies. An older woman was at the counter when they walked in; she didn't look up when they entered.  Dylan had seen her there before, and she always looked the same--frown on her face and looking down.

"Merry Christmas!" Dylan said as he passed her. She didn't look up.

"I'm going to go look at the guns!" His brother said running off before Dylan could stop him.

Dylan made his way to the back corner to the small book portion of the library. He was surprised that the volunteer librarian actually bothered showing up. He was sitting behind an old school desk reading a book.

"You even work on Christmas?"

"I even volunteer on Christmas," the librarian corrected with a smile, putting his book down. He brushed back his long brown hair, and adjusted his glasses. "I don't have any family at home anymore; this is all I have. What's your excuse?"

"My mom wanted my brother and I out of the house," he paused and looked up sadly, "My sister died today." It felt good to get out. He wanted to tell someone. "I just found out."

The librarian put down his book he had been reading and removed his glasses; he studied Dylan several seconds, and then said, "That's a heck of a Christmas gift.” He stood and walked to him, and put his hand gently on his shoulder, “I'm sorry."

Dylan nodded and sat in front of him on an old wooden chair, "Have you ever lost someone--close like that, I mean?"

"Too many to even count." The librarian explained placing another wooden library chair in front of Dylan and sitting down.

"My mom won't talk about it--she didn't even tell me. I only know because I overheard them at the door."

"We all have different ways of dealing with tragedies." He paused, "My wife--she was a nurse--she volunteered to go to Los Angeles after the bombing three years ago. I never saw her again--they would only tell me that she went missing." He paused, "When I found out, I was numb. I didn't talk. I was still going to church when it happened, and the minister stopped by to counsel me, but there is no such thing as counsel to grief. Words--they didn't make the numbness go away. "He paused and put his hand on Dylan's knee, "Your mom will just want to see you right now. Eventually she'll talk--you'll grieve together. But right now just be there for her."

"But that doesn't help you.” The librarian said, “Do you want to talk about it?"

"I don't know what I'm supposed to say."

"Brave." Dylan paused and thought for a moment, "When my dad left, she kind of took over. She fixed things and took care of us--my mom was there, but my sister was my friend." Dylan looked down and softly said, "I don't have a lot of friends."

"What was the last thing she said to you?"

"Be strong." Dylan said, "Right before she left. I walked her to the bus--I wasn’t going to--I was mad she was leaving. She hugged me. We never really did that. I remember looking in her eyes and it was the only time she really looked a little scared. She was always fearless."

"You know what that is?"

"It's a memory and that's more than most people have--so many people today lose siblings long before they can establish any kind of connection. For the rest of your life, you'll have a connection. This war may have taken away your sister's life, but it can't take away your memory of her. Remember that memory--and every memory. Don't ever stop, and your sister will stay with you."

His brother came back. "Hey Dylan! There's some guys that are going to let me go shooting with them at Legoland. Can I go?"

"You aren't ready for that."

"Lame!" He said walking off to look at an old magazine.

"How did this war start?" Dylan asked.

“Doesn’t your school teach you that?” The librarian said with a coy smile.

“Only what we need to know.”

“And what do you need to know?”